She called from Dallas. Her voice was pleasant but she was worried. As she explained the problem I could see why.

She was a writer who got story tips from correspondents around the country. They called to her answering machine and left messages. But her next door neighbor was a lady who talked on CB all day long. And her voice came in loud and clear on the answering machine. Many of the callers, hearing her voice, thought they were talking to someone. Callers were confused, messages were lost, the telephone company’s efforts failed, the FCC couldn’t help, she was getting desperate. Could I suggest something? Anything to get rid of that CB woman.

I thought that a split bead or two might do the job. I recommended a Palomar FSB-l/4; these are “Ferrite ,Split Beads”, inch long blocks of ferrite with a quarter inch diameter hole. They’ve been split in half lengthwise so you can place them over

a cable, mate the two halves together again, then tape them in place. This way you can get a bead over a cable that already has big plugs, or a telephone, on the end. The telephone cable will go through the hole a couple of times.

She ordered two and I sent them to her. Case solved, I hoped. A week later she called again and told me that they didn’t work. She put both beads on the telephone cable and the CB lady was still there. I thought for a minute then asked her if there were any other wires coming out of the answering machine, a power cord for example. “Yes,” she said, “there’s a wall plug power cord.” “Try putting one of the beads on that cable”, I suggested. “OK. Wait a minute” she said. There was silence for awhile then she was back quite excited. “She’s gone! She’s gone! She’s gone!” she said. “As soon as I put that bead over the power cord she disappeared.”

I’m always in the wrong place at the right time. Here I was in San Diego. Had I been there in Dallas I’m sure she would have given me a big kiss. As it was she thanked me profusely. And I had made a lady very happy.

Why did I tell you this story? For several reasons. 1) because it shows how $5 worth of ferrite beads could do what the ‘phone company, and the FCC were unable to do. And it did it so well that, to the lady, it seemed like magic. 2) At first it looked as though

the beads weren’t going to work at all but, by experimenting and moving the beads around, a CURE was found. 3) There may be more than one PATH the interfering signal is using to get into the RECEPTOR. And you can’t tell by looking which PATH is causing the problem. Maybe several of them are. Check every cable that goes into the RECEPTOR. 4) This is a clear illustration of two common PATHS in the average building. Telephone wires tend be long and unshielded; perfect for picking up HF signals. Power wiring also runs through the building and may have considerable length outside that is elevated and close to the transmitting antenna.

Q. When I put a bead over a telephone cable it stops the interference from my transmitter. But does it affect the voice signal coming into the telephone or my modem signals going out?

A. Because the voice and modem signals are differential mode and the RFI is common mode.

Q. Can you put that into plain English?

A. Yes. Look at Fig. 1. The arrows show the direction of current flow in a differential mode signal. This is the way currents flow in a twin-lead transmission line or in a telephone line. At one end of the line is the generator (this could be your transmitter or a telephone microphone). At the other end is the load (this could be your antenna or the telephone earpiece). Current comes out of the generator, flows to the load, through the

load and back to the generator. It goes one way in the first wire and the other way in the second wire. Reminder: It takes two wires to carry electricity.

Now look at Fig. 2. The interference signal current flows in the same direction in the two wires. Why? Because both wires have been exposed to the same RF field. We call this a “common mode” signal. The two wires of the line are just one conductor as far as

a common mode signal is concerned. Where is the return path? Ground!

The ferrite bead over the cable is over just one wire as far as common mode signals are concerned. The common mode current produces a magnetic field that goes through the bead. But there is no opposite current to cancel the field because the return current

is down there in the ground. So the bead, which is lossy at RF,

turns the field into heat thus getting rid of our RFI.

the desired transmissions at all. 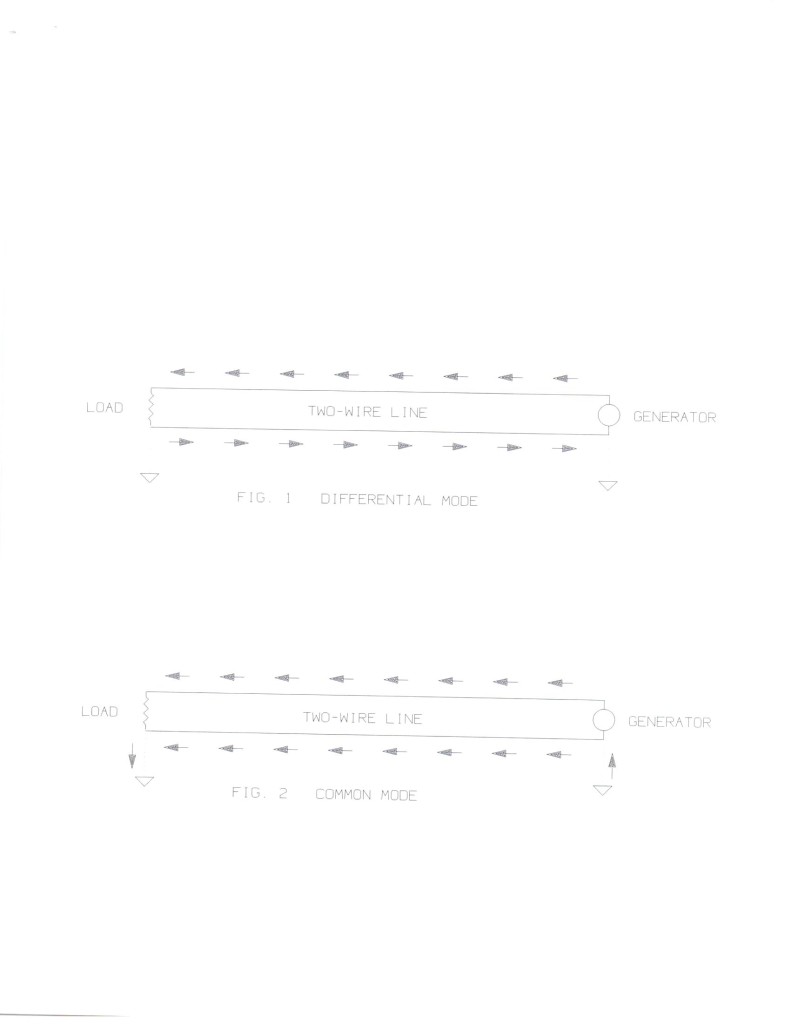