Dipole antennas are very simple to construct and use and are very efficient if matched correctly at the feed point height.  Dipole antennas and coax feed line can pickup neighborhood noise which can mask many weak signals and hinder reception and two-way communication.

Fortunately Palomar Engineers has simple building block solutions to solve the matching and noise issues as well as a seldom used vertical design that has a higher radiation efficiency and stronger reception of HF band (1-30 MHz) signals for amateur and commercial radio communication. 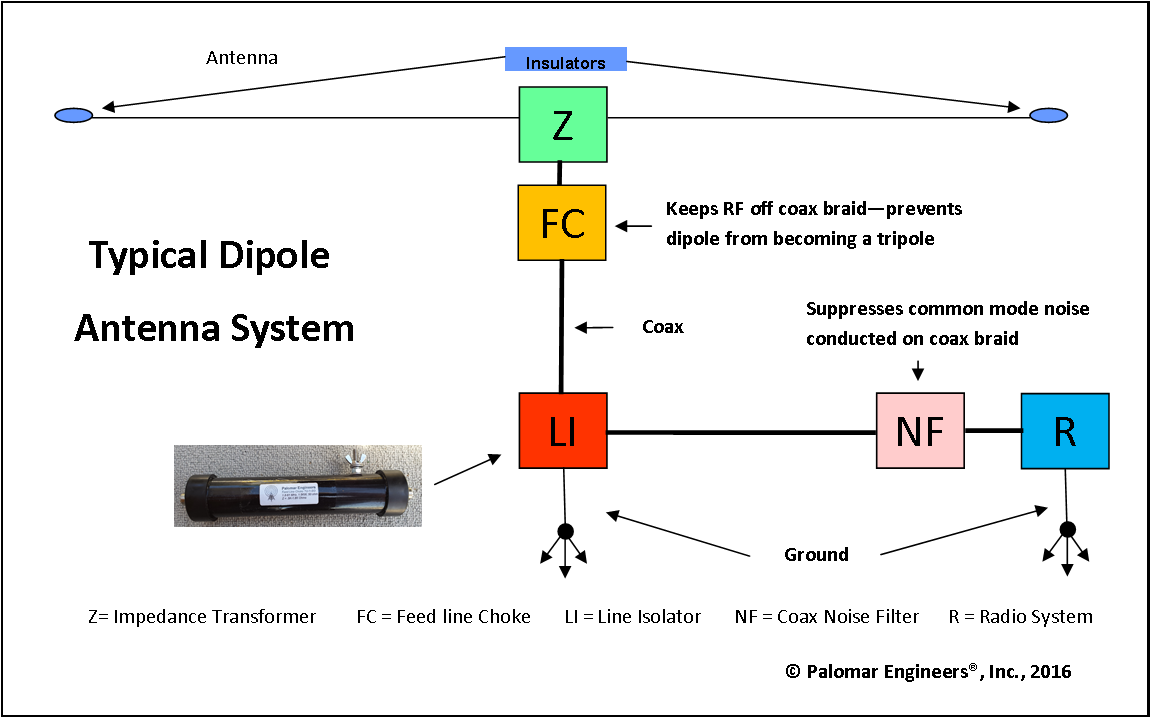 The typical antenna (vertical or horizontal polarized) has 6 components.

The antenna or radiating element (See Antenna Types below for specific characteristics).

The Feed line Choke (BOX “FC” above) to suppress the common mode current on the outside of the coax feed line. The Feed line (FC) acts as a stop sign for RF current desiring to flow back on the outside of the coax.  The higher the choking resistance of the fed line choke, the less the coax braid RFI common mode current and more power into the antenna system.  Feed Line choke alternatives are HERE.  See ANTENNA TYPES below for specific types of chokes for each antenna.

Coax noise filters (BOX “NF” above) are very useful for all types of antennas but a very effective for vertical feed line drops since much broadband noise is vertically polarized. Common mode current induced by radiated sources (plasma TV, routers, computers, transmitters, radiating antennas, etc) can be picked up by the outside of the coax braid from the antenna feed point back to the receiver.  This portion of the coax braid acts like a receiving antenna, picking up common mode noise signals that override weak signals making them difficult or impossible to hear!  The solution?  A common mode noise filter with high choking impedance at the receiver end of the coax.  Common mode noise filters are HERE.

The radio station is also a key component of the antenna system and has two functions: transmit and receive.  Matching the transmitter to the coax feed line is often done with an antenna tuner and receiver systems should be installed to maximize signal to noise ratio.  Reducing receiver noise is critical for weak signal reception and the use of coax noise filters AND receiver power supply lines (AC or DC) noise filters is usually needed for optimum reception. Reducing RFI generated by the radio station (you are the SOURCE of RFI) or received by your radio station (you are the VICTIM of RFI) is an important aspect of radio station operations.  Palomar Engineers has many solutions for RFI problems – Click HERE to develop alternative strategies depending on your particular situation.

– knowing how to properly feed a dipole antenna can improve its performance as well as reducing unwanted effects. Calculating the feed point impedance is also a key part of this process.

The feed impedance is of particular importance along with knowing the best way of feeding a dipole antenna.

To ensure the optimum transfer of energy from the feeder, or source / load, the dipole antenna feed impedance should be the same as that of the source or load.

By matching the feed impedance of the dipole to the source or load, the antenna is able to operate to its maximum efficiency.

The length of a half wavelength dipole is 468/F (MHz).

The feed impedance of a dipole is determined by the ratio of the voltage and the current at the feed point. A simple Ohms Law calculation will enable the impedance to be determined.

Although a dipole can be fed at any point, it is typically fed at the current maximum and voltage minimum point. This gives a low impedance which is normally more manageable.

Most dipoles tend to be multiples of half wavelengths long. It is therefore possible to feed the dipole at any one of these voltage minimum or current maximum points which occur at a point that is a quarter wavelength from the end, and then at half wavelength intervals.

The basic half wave dipole antenna with center feed point
Want to try making a simple dipole rated at 500 watts?  Try the Bullet™ Dipole kits – buy the Bullet 1:1 balun and center feed point and add the optional wire kit for your band of choice:  Click on the product below:

We also offer dipole wire kits for ease of antenna construction – choose the band of interet – includes insulators and connectors for the balun.

The dipole feed impedance is made up from two constituents:

As with any RF antenna, the feed impedance of a dipole antenna is dependent upon a variety of factors including the length, the feed position, the environment and the like. A half wave center fed dipole antenna in free space has an impedance 73.13 ohms making it ideal to feed with 75 ohm feeder.

The feed impedance of a dipole can be changed by a variety of factors, the proximity of other objects having a marked effect. The ground has a major effect. If the dipole antenna forms the radiating element for a more complicated form of RF antenna, then elements of the RF antenna will have an effect. Often the effect is to lower the impedance, and when used in some antennas the feed impedance of the dipole element may fall to ten ohms or less, and methods need to be used to ensure a good match is maintained with the feeder.

For larger dipole antennas like those used for frequencies below about 30 to 50 MHz, the height above ground can be a major influence on the feed impedance. At these frequencies the distance between the antenna and the ground may be only a wavelength or two in many instances. At these sorts of heights, the ground can have a major influence on the impedance, especially when the antenna is mounted horizontally as is often the case.

Variation of a half wave dipole at different heights above ground

As can be seen from the impedance variation plot, the largest swings of impedance are seen when the dipole antenna is closest to the ground. It then closes in on the free space value.  The table below give the actual heights for each frequency in the amateur bands.  Multi-band antennas may have different feed point impedances on each band. Between .25 and .4 wavelengths the dipole exhibits an impedance around 100 ohms and a 2:1 balun may be a closer match than a 1:1 provided enough choking impedance is in the 2:1 balun (like our BA-2-1000 kit or assembled CB-2-1500)  to keep common mode current off the outside of the coax braid.  If the antenna is low, than it can be fed with a 1:1 balun/unun to choke the common mode current. 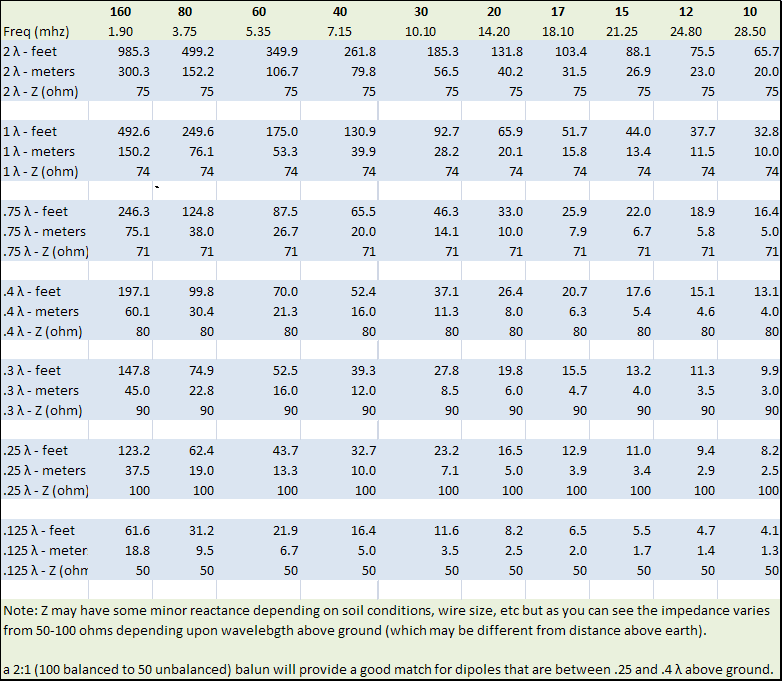 When feeding a dipole it is best to use a feed line choke to keep the RF from the transmitter on the antenna by choking any current desiring to return via the outside coax braid.  By using the choke your dipole will not become a tripole and cause the coax feed line to radiate.

Helpful links to aid in choosing a feed line choke for your antenna:

In its basic form the folded dipole antenna consists of a basic dipole with an added conductor connecting the two ends together to make a complete loop of wire or other conductor. As the ends appear to be folded back, the antenna is called a folded dipole.

The basic format for the folded dipole aerial is shown below. As can be seen from this it is a balanced antenna, like the standard dipole, although it can be fed with unbalanced feeder provided that a balun of some form is used to transform from an unbalanced to balanced feed structure.

In a standard dipole the currents flowing along the conductors are in phase and as a result there is no cancellation of the fields and radiation occurs. When the second conductor is added to make the folded dipole antenna this can be considered as an extension to the standard dipole with the ends folded back to meet each other. As a result the currents in the new section flow in the same direction as those in the original dipole. The currents along both the half-waves are therefore in phase and the antenna will radiate with the same radiation patterns etc. as a simple half-wave dipole.

The impedance increase can be deduced from the fact that the power supplied to a folded dipole antenna is evenly shared between the two sections which make up the antenna. This means that when compared to a standard dipole the current in each conductor is reduced to a half. As the same power is applied, the impedance has to be raised by a factor of four to retain balance in the equation Watts = I^2 x R.

There are a number of advantages or reasons for using a folded dipole antenna:

300 ohm feed point folded dipoles can be matched to 50 ohms with a 300:50 ohm (6 to 1)  impedance transformer (configured as a balun) or to 75 ohm coax cable with a 300:75  (4 to 1) impedance transformer (configured as a balun).  In either case a feed line choke is needed between the balun input and the coax to the station receiver/transmitter to prevent common mode current from flowing on the outside of the coax braid.  See Why do I need a Balun.