How many chokes do you need?

Example: If you are using the Snap-On beads for RFI suppression, let’s say on an ethernet cable with a series impedance, at 28 Mhz (the interference frequency), of 300 ohms, then if we can reduce the RF current by 6 db (one half), the interference radiated by the cable will also drop by 6 db.  To accomplish this current reduction we must increase the series resistance to 600 ohms (or more) to reduce the current by 50%. 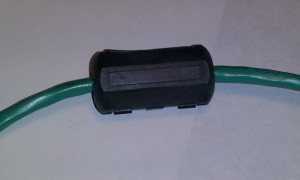 Solution #2: Instead of using a FSB-1/4 Snap on choke, use a FSB-1/2 Snap on choke and pass the Ethernet wire through twice thereby increasing the effective impedance 4X.  The impedance of a FSB-1/4 choke at 28 mHz is about 160 ohms.  Passing the cable through 2 times give an effective impedance of 640 ohms with only 1 choke.  Passing the cable through 3 times gives 1440 ohms (9X) the impedance for even better current suppression (see picture below).  Chokes may be needed at both ends depending on the electrical length of the cable as described in Solution#1. 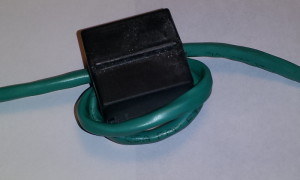 Solution#3: Use 2.4” ferrite toroid with mix 43 and wind the cable through 7 turns to get an impedance over 1,000 ohms (measured data). Each time the cable goes through the center of the toroid counts as one turn.  Depending on the size of your cable, the larger inner diameter toroid may be the most effective. (see picture below) 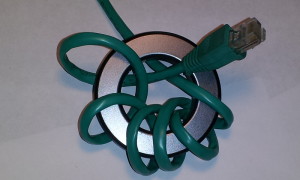 It is quite possible that additional chokes may be needed to increase the series impedance enough to reduce the interfering frequency current.  In addition the power supply lines that supply DC/AC power to the unit will also need to be “choked” as the negative, or ground “return’ is also part of the radiating/receiving antenna in this system.  A good rule of thumb is that it usually takes 1000-5000 ohms of choke impedance to make a difference in RFI suppression. Higher values over 5,000 also help in reducing induced common mode noise reduction from external noise generators thus reducing the noise levels in your receiver. Remember choke impedance varies with frequency. 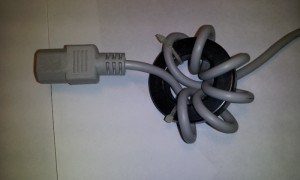 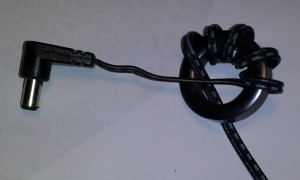 For your convenience, Pre-configured RFI kits are available for various electronic devices which are susceptible to RFI or generate RFI that effect other devices – see RFI Kits on the website at www.Palomar-Engineers.com